St Mary’s school was established before 1860 when a single stone-built classroom, for children aged 5-14, was added to the existing church building.  This was a decade before the 1870 Education Act which proposed elementary education for all children. 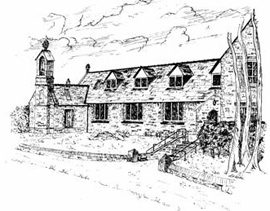 It was prophetic in meeting the needs of the time as we hope its successor is in today’s world.  The school then provided for the influx of Irish Catholics, who settled in large numbers and were instrumental in building our canals and railways. A similar classroom added in 1881 enabled the infant children to have a room of their own.  For years this accommodation sufficed, and was thought to be luxurious in comparison to educational standards of the time.

Numbers increased over the years as the population grew and space was at a premium. During the Second World War, when the Channel Islands were under occupation, the school was shared with a group of children who came to the district accompanied by two teaching Sisters from St Peter Port in Guernsey.  After the devastation caused to city schools during the war, a huge building programme was undertaken by the then Ministry of Education.  Our school Managers (Governors today) counted themselves fortunate for the new school to be proposed for inclusion in the building programme for 1952-3.

In the late 1940’s St Mary’s was still an “All-Age School” since there was no provision for secondary-age Catholic children between Stockport and Glossop.  Such was the over-crowding at one stage that premises over a village shop were rented. Following a determined struggle, permission was obtained for the 11+ children to attend Catholic secondary schools, first in Dukinfield, then in Stockport and finally in Glossop.  By the early 1950’s there were 300 Primary aged children in the school, drawn not only from Marple Bridge, Marple, Mellor and Compstall, but also from Romiley, Bredbury and Hazel Grove (until St Christopher’s,  St Peter’s, St Simon’s and St Philip’s Primary Schools came into being).  Even Reception children travelled daily by service bus from these outlying areas until, after a long period of negotiation, permission was obtained for the children to have special buses operated by the North-Western Road Car Company.

Our place in the 1952-3 building programme was postponed year by year. The School Managers had to deal pragmatically with the urgent accommodation problems.  First the Parish Hall was taken over and used as classrooms and dining accommodation.  In the mid-sixties, the Infant children were housed first in a room in the present URC building and then later in the old Compstall School building and were transported to and fro by bus from the main school until a prefabricated wooden building was built in the grounds of the old orchard.

Throughout all these years the parents remained loyal to the school and joined in continuous fund-raising efforts to build a school worthy of their educational ideals.  So, after many years of hard campaigning, by the parish and school, the present St Mary’s school was built in three separate phases. Three class-rooms were opened in 1970, followed by the Hall, Kitchen and Administration Wing in 1972. The building was completed in 1974 with the addition of an “Open-Plan” department. The playing field was levelled, drained and fenced in 1977 and the final landscaping completed in 1981.  Extensive repairs and re-modelling have taken place since 1991 and the ‘Open Plan’ area has been replaced by four enclosed classrooms which includes a fully resourced Nursery.

In 2007, a new block was added to the school, providing a spacious entrance area, much needed office space, a music room, a medical room and an extension to the staffroom as well as upgraded toilet facilities.

Today this modern well-equipped Primary School stimulates its pupils to live happily and fully as children and provides for the successful transition to Harrytown High School.  It creates the foundation for a responsible mature adult life in the 21st century.

You can find out more about which cookies we are using or switch them off in settings.

This website uses cookies so that we can provide you with the best user experience possible. Cookie information is stored in your browser and performs functions such as recognising you when you return to our website and helping our team to understand which sections of the website you find most interesting and useful.

Strictly Necessary Cookie should be enabled at all times so that we can save your preferences for cookie settings.

If you disable this cookie, we will not be able to save your preferences. This means that every time you visit this website you will need to enable or disable cookies again.

This website uses Google Analytics to collect anonymous information such as the number of visitors to the site, and the most popular pages.

Please enable Strictly Necessary Cookies first so that we can save your preferences!